Sports Interaction is the first licensed and regulated online bookie in Canada. Users can choose from a wide range of markets in the sportsbook or the racebook, and there is also a large selection of casino games plus a new poker offering. Many popular payment methods in Canada can be used, so it is no wonder that this is one of the most used bookies in the country. 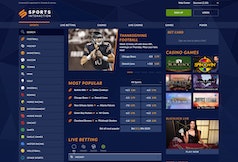 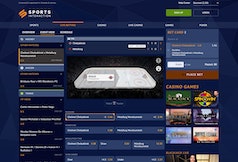 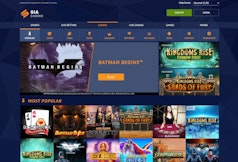 For Canadian bettors, Sports Interaction is a more than competent sportsbook to use. It was the first licensed and regulated online bookie in the country, and has been around for over 20 years. 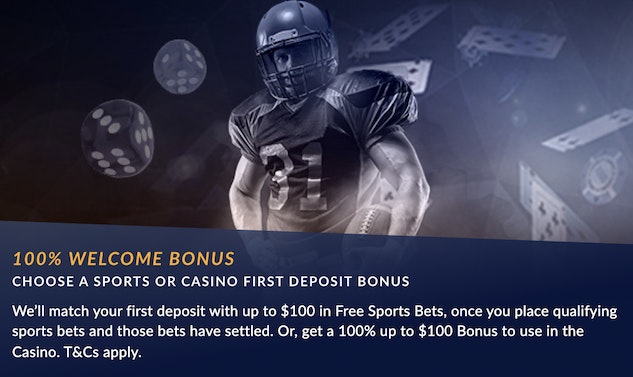 Claim the Sports Interaction bonus offer and start betting on NFL and more.

The trust and reputation that Sports Interaction has built up over the past two decades has allowed it to become one of the most used betting sites in Canada.

It is not only the most esteemed online betting company in Canada, but its range of markets and features rivals many of its overseas competitors.

All major sports are covered, and it allows for live betting, as any modern-day betting site must do.

The site is very easy to use on desktop or mobile. When entering the site on your computer, you will be greeted with the most popular upcoming markets, as well as live events taking place which you can bet on.

Down the left-hand side of the site is a list of sports, each with a dropdown menu that takes you to specific leagues and events.

A dedicated horse racing section called 'Racebook' is a new addition to Sports Interaction and it allows punters to wager on thoroughbred and harness racing from around the world.

Casino games are also heavily pushed, with a number of clickable images on the home page directing users towards blackjack, roulette, slots, poker, and more.

Customers who do not have an existing Sports Interaction account and have never previously deposited on the site can claim a 100% bonus when they sign up.

How to claim the Sports Interaction Bonus:

Canadians can enjoy slots, live dealers, and over 1000 casino games in total at the Sports Interaction online casino site.

The welcome offer for new players presents an opportunity to scoop a bonus of up to $200 on your first deposit. To do so, follow these steps: 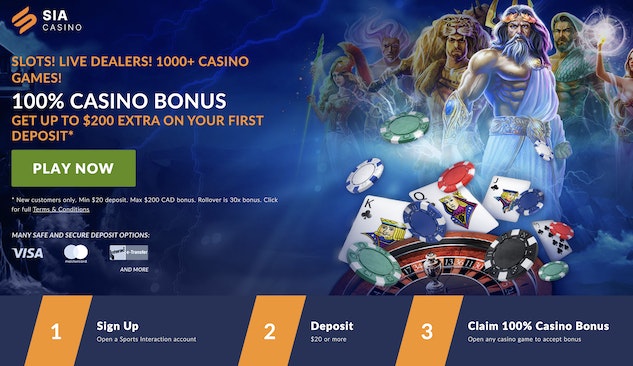 The Sports Interaction bonus for casino can be claimed via Interac and other methods.

If you are from Canada, yes! Follow these steps to claim up $200 in Free Bets!

Indeed! Markets such as point spread, money line and race winner are available, plus many more. Choose your event, add a selection to the bet card, enter your stake and hit ‘Place Bet’.

It is as trustworthy as any bookie, and is regulated by the Kahnawake Gaming Commission and Jersey Gambling Commission. They have 24/7 live chat and a phone number which you can call if you face any issues.

💹 Does Sports Interaction offer a good variety of betting markets?

Absolutely - especially for the most popular sports. The soccer betting section in particular has tens of thousands of markets, and there is also plenty to choose from with regards to tennis, football, baseball, hockey, basketball, and more.

🤑 Is there a casino bonus at Sports Interaction?

There sure is - it is a bonus of up to $200 and you can claim it by doing the following:

Whilst the simplicity also carries over to the mobile version, there is no Sports Interaction sportsbook app.

Fear not though, if you prefer to bet on your iPhone or Android, you can do so without a hitch on your mobile browser.

Upon landing on the mobile site, users are presented with a number of popular bets, and after scrolling down, they can see the live betting markets currently in-play. 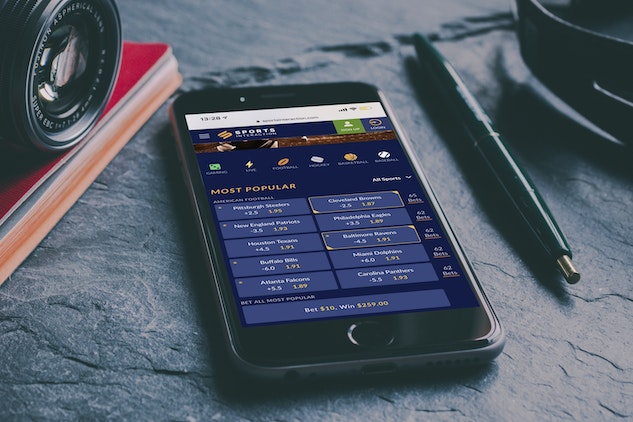 The Sports Interaction mobile site contains all of the same markets you see on desktop.

Clicking an icon in the top left corner will show all of the sports on the betting site, and at the bottom of the list is a live chat icon.

The Sports Interaction mobile site is a perfectly viable option for bettors in Canada.

New customers can easily sign up to Sports Interaction via the mobile site, and in doing so can claim a sign-up offer of up to $200 in Free Bets.

Canadian sports fans have plenty to choose from on Sports Interaction, with hundreds of events available to bet on each day.

Punters can bet on the most popular North American sports, and also dozens more obscure ones such as volleyball, handball, and cycling.

Every user will have their own preferences, but below are some of the key sections of this betting site:

There is a wide variety of markets available on the NFL, CFL, and NCAAF at any given time. Futures bets are available, such as Super Bowl winner and a team to make the play-offs.

Bettors can back teams to cover a points spread or just to win the game, and there are also special markets that pop up - for example, a particular team to win or lose every game they play during the regular season.

Every MLB game is listed on Sports Interaction, in addition to international leagues. When looking through the day’s slate of Major League action, the pitchers appear next to the team names, which is all-important. Further information and stats are easily accessible by clicking the icon next to each game. 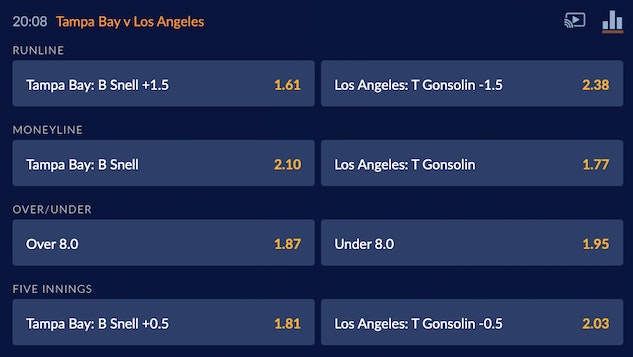 Sports Interaction's baseball odds are among the best on the market.

Sports Interaction offers more soccer betting markets than any other sport. It is such a dynamic game, with many leagues around the world, so this should not come as a surprise.

You can make single or parlay bets on games every day including the Premier League, Champions League or La Liga, and futures bets even go as far as the FIFA World Cup 2022.

Like soccer, there are a huge number of markets out there for tennis, and Sports Interaction covers games featuring players deep down the rankings in ITF events, as well as the Grand Slam tournaments.

Live betting is available and runs smoothly on the site, with odds updating constantly after each point.

One of the world’s most popular sports to participate in, golf is also fun to bet on, and Sports Interaction offer odds on many tournaments including all four majors and the Ryder Cup.

NHL is massive in Canada, and as such, it is a popular league on Sports Interaction. North America isn’t the only part of the world with hockey games on this betting site, though, as leagues in Europe are also available.

There are a plethora of ways to bet on basketball as its high-scoring nature allows for lots of variables, and the quantity of NBA betting markets offered on Sports Interaction reflects that.

The popularity of the NBA is on the rise in Canada, and this has been accelerated by the Toronto Raptors’ championship success in 2019.

Sports Interaction does the basics very well, giving recreational punters in Canada everything they need in order to place a variety of bets.

In the Sports Interaction live betting tab, you can sort by sport and see the odds fluctuating constantly. A good selection of markets are available across soccer and tennis in particular as they are the sports that seem to be on constantly.

Follow the action through live graphics and up-to-date stats.

You can view a full schedule of the upcoming live betting events at any time, and the exemplary functionality on the sportsbook means you that the service is reliable if you want to place quick live bets.

There is a Promos tab on the Sports Interaction site, and it displays the number of available promotions in a red circle to give the appearance of notifications.

If you do not already have an account, you will see the Sports Interaction bonus for new customers, and all users will see the other deals on offer.

The sportsbook and casino offers are grouped together, and recent deals include a Refer A Friend promotion and a 777 casino bonus.

On top of a great betting site, Sports Interaction offer excellent analysis on their Insights page.

The page shows stats that might be relevant to bettors, such as the percentage of betting action on each team in big games, as well as various rankings and standings.

You can read written previews of upcoming events, and you will also find guides that explain how to bet on certain markets and sports. 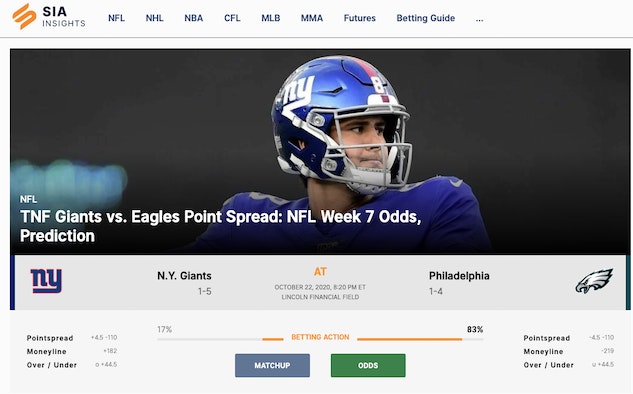 Sports Interaction, founded in 1997, is a Canadian betting site which takes bets on many sports, and also hosts an online casino with games such as poker, blackjack and slots, including live play.

The company, based just outside of Montreal, was the first sportsbook in Canada to offer online sports betting on the outcome of single events.