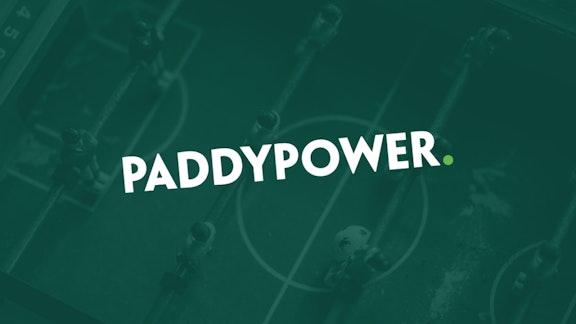 Paddy Power Fantasy: How It Works

Fantasy sports is a popular concept all over the world, and of all of the UK betting sites, Paddy Power has the best DFS offering across many sports.

Most sports fans are aware of the 'Fantasy' concept - particularly those who are interested in football. Fantasy Premier League is the most popular game of its kind in the UK; it is a season-long competition in which users pick a squad of players and try to win leagues against their friends and other fans.

But in the US, daily fantasy leads the way. You can draft a team from just one game or a slate of games, and there are prizes for those who accumulate the most total points.

Through the online betting site, Paddy Power, British players can partake in cash tournaments just like those that have been a major hit across the pond.

You can get started on Paddy Power with money back up to £20 on your first bet plus an extra £5 free bet for a bet builder.

How to Claim the Paddy Power welcome offer:

Place 5x£10 Sportsbook bets on any market at minimum odds of 2.0 (Evs), and get money back as Cash if it loses. Max refund per qualifying bet is £10 (up to £50 in total). Only deposits made via Cards will be eligible for the promotion (Apple Pay excluded). T&Cs apply

How Do You Play Daily Fantasy Sports?

Daily Fantasy is a simple and fun concept in which you build a team of players within a salary cap, and earn points based on their performance.

There are different formats with their own unique payout permutations, but in any case, you are essentially betting on your team accumulating enough points to win the cash prizes.

Entry fees can be anything from completely free to tens of thousands of pounds, and the same can be said for the player pools. You may opt for a head-to-head contest with one other player, or you can enter large tournaments with hundreds of thousands of entrants and a potentially huge payout.

How Does Paddy Power Fantasy Work?

Paddy Power's bread and butter is their outstanding sportsbook, but the Fantasy Sports offering is also exemplary and undoubtedly the best of its kind in the UK.

In the lobby, you'll see all of the upcoming contests that are available, or you can select a specific sport and go into more detail for one league in particular. 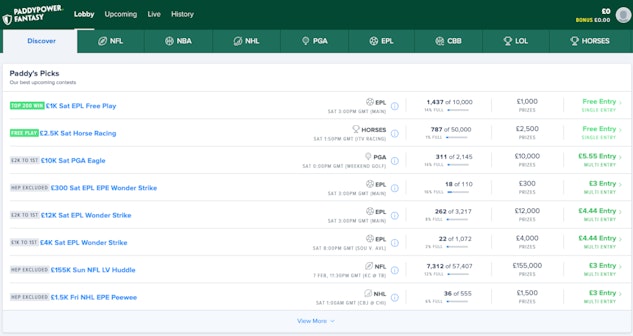 Many football competitions are available, as well as horse racing, golf, and all major American sports.

Of course, each sport and each type of contest will have its own stipulations, but below are some quick and easy steps to follow.

You need to have an account with Paddy Power in order to play in their Fantasy contests. The registration process is simple and you can claim money back on your first bet up to £20 plus a £5 free bet for a bet builder.

Once you have done this, you can enter the Fantasy section and pick out some tournaments to take part in.

Whether you want to stick to football, want some late-night NBA action, or want to pick a golf team that will give you some interest over four days, there are many options on tap through Paddy Power Fantasy.

There are small and large entry fees to suit players of all levels, and you also need to decide whether you want to play in a tournament, a 50/50 (finish in the top half to win), or one of the various other contests on offer.

Click on any contest to view the prizes, rules, and scoring.

The NBA, in particular, has a range of game styles, including a three-point challenge (in which only three-pointers count), a three-man challenge, and some snake draft options.

When you have decided on a contest, you can click 'Enter New Lineup' and begin to make your picks. In most formats, a salary is assigned to each player and you need to stay within a salary cap in order for your lineup to be eligible. 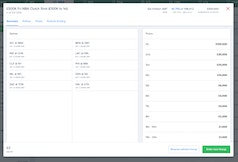 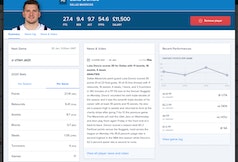 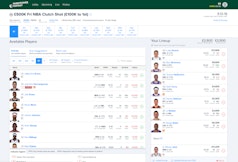 There are plenty of stats and insights on the site to help you pick your team, and for NBA contests there are even 'Guru Suggestions' which tells you the best players or the individuals that have the best matchups.

Once you are happy with your team, click 'Enter Lineup' and the entry fee will be taken from your account. You need to have enough funds in your account in order to get to this stage.

Some contests allow multiple entries, or you can enter the same lineup into different contests if you wish.

Winning Paddy Power Fantasy contests, or finishing high up the leaderboard in the big tournaments, is not easy. You need to have strategies for each type of contest that you enter, and while this can take a long time to perfect, be sure to at least consider the following.

There are some team builds that are better for some contests than others. For example, to win a big tournament, you need a number of high upside players that could be the difference between your team and the other contenders. It also helps if not many other people have picked that player, so try to think outside the box and go for some rogue but possible profitable plays.

On the other hand, in a 50/50 contest in which you are just aiming to finish in the top half, you might instead want to pick players that have a high floor and can be trusted. In golfing terms, you'd want a player that always makes the cut, even if he rarely wins.

Start off with some beginner contests, and work your way up from there if you start to have some success.

Beginner tips and contests are available for DFS novices.

If you know something that most of the other users in the contest don't, that gives you an instant edge over the competition. In basketball, if a certain player is on a minutes restriction, does that mean someone else might get more playing time than usual? Could this impact the opposing player that would be guarding him?

Similarly, in football, if a team has injuries, could it result in one player playing a bit further forward, thus increasing his chances of scoring?

Again, it is all about thinking outside of the box and finding potential opportunities to steal a march.

Stacking is a popular strategy, especially in American football, and it is a way of maximising potential upside. If you pick a quarterback and one or two wide receivers from the same team, you can score big as if a receiver scores multiple touchdowns, the quarterback does too.

You can also do this with Premier League football. You could pick a goalkeeper and multiple defenders from the same team, thus getting all of the clean sheet points if they don't concede.

What is Paddy Power Fantasy?

Paddy Power is a section of the Paddy Power site that allows users to play Daily Fantasy games. In these contests, you pick a team made up of players from certain games and attempt to win prizes by accumulating points based on the performances of the players.

Which sports can you play on Paddy Power Fantasy?

Is there a welcome offer for Paddy Power Fantasy?

There is a Paddy Power welcome offer but it is for the sportsbook rather than the Fantasy section. Your sportsbook balance can be used in Fantasy contests, though.

New customers only. Place your FIRST bet on any Sportsbook market and if it loses we will refund your stake in CASH. Max refund is £20. Only deposits made using Cards or Apple Pay will qualify. £5 Bet Builder free bet will be available to claim from the promotions hub after the qualifying bet has been settled & will be valid for 7 days. T&Cs apply.

How much can I win on Paddy Power Fantasy?

Some of the top tournaments on Paddy Power have seven-figure payouts. These can usually be found within the NFL section. For the NBA, there are prizes of up to £100,000 every night, and there is plenty more up for grabs in the other sports too.

Yes, there are regular free Premier League contests and some horse racing and NFL contests that are free to enter as well.

Paddy Power Beat the Drop: How It Works

Punters at Paddy Power can win up to £5,000 by answering 15 questions and ultimately managing to 'Beat the Drop'. You get one free game per day through this unique promotion. Read more